The Visit or The Old Lady Comes to Call 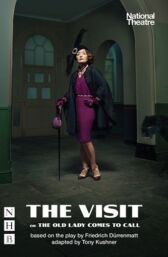 It's set in the town of Slurry, New York, where the post-war recession has bitten hard

Once poor, she's now the world's richest woman and the locals hope her return to her hometown will signal a change in their fortunes

"A superb piece of theatre this grotesquely funny study of money and morality has a remorseless, relentless force" ~ Evening Standard