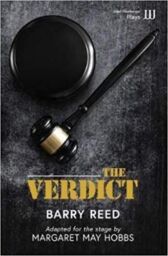 Margaret May Hobbs from Barry Reed

An accomplished stage adaptation of the novel by Barry Reed and the film by Sidney Lumet starring Paul Newman, James Mason and Charlotte Rampling

Frank Galvin is a washed-up veteran lawyer and an alcoholic, now reduced to ambulance-chasing cases

Up against the unforgiving Boston medical establishment, he courageously refuses an out-of-court settlement, believing it is negligence that has condemned a young mother to life in a coma and not simply an unfortunate accident

Smelling a cover-up, he instead takes the case and the entire legal system to court