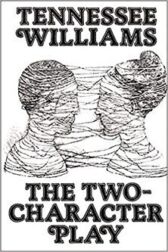 A classic play by Tennessee Williams in a definitive, author-approved edition

Faced (perhaps) by an audience expecting a performance, they enact "The Two-Character Play"― an illusion within an illusion, and "out cry" from isolation, panic and fear

"I think it is my most beautiful play since Streetcar," Tennessee Williams said, "and I've never stopped working on it....It is a cri de coeur, but then all creative work, all life, in a sense is a cri de coeur"

In the course of its evolution, several earlier versions of The Two-Character Play have been produced