The Tricks of the Trade 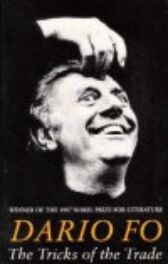 A handbook of the range of skills that Fo has acquired in the course of his professional life and a record of his own experiences as conveyed through a series of performance seminars that he and his wife Franca Rame, the celebrated actress and feminist, conducted around the world on the subject of acting

In places as diverse as London's Riverside Studios and Perugia's Free Universtiy of Alcatraz, Fo and Rame have revealed to rapt audiences the many facets of the actor's art, his and her Tricks of the Trade

Tracing the life of the comic performer back to the itinerant jongleur and the skilful improvisations of later commedia dell'arte troupes, here are his thoughts and second thoughts on all topics theatrical and a kind of unsystematic manifesto for the style of theatre he admires and which he has attempted to write and stage

"An angular, uncomfortable, disquieting and inspirational account of an art in which there are no more universal performers and recorders than Dario Fo and Franca Rame" - Independent