The Trial of Trayvon Martin 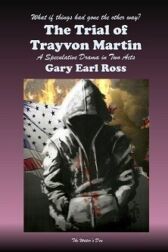 The February 2012 shooting death of teenager Trayvon Martin in Sanford, Florida, and the acquittal of shooter George Zimmerman remain controversial

All the characters in this play are fictitious, even those who share names with the living and the dead

The Trial of Trayvon Martin was first performed April 6, 2017 in Buffalo, New York, at the Manny Fried Playhouse by the Subversive Theatre Collective.