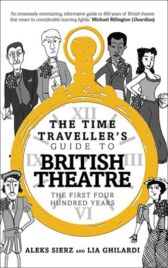 But where did it all start and how did we get here?

To find out, we time travel back four hundred years when there was not a single theatre in the land

Lively and based on extensive research, it explores our rich and living heritage, covering all the great names - from Shakespeare to Terence Rattigan, by way of Oscar Wilde and George Bernard Shaw - and the classic plays, many of which are revived today

It visits the venues and tells their dramatic stories

And at every stage of this epic journey a fictional guide - each with their own idiosyncrasies and personal prejudices - introduces our intrepid travellers to the characters, controversies, gossip, stages and plays that made four centuries of headlines

"A great deal of research and erudition has been expended to ensure that readers will learn much about British theatre in the 405 year the period from 1550, when the authors suggest that the modern play was born... This book is the perfect introduction to British theatre... even those who know a great deal about the subject will be entertained and learn a great deal as they enjoy this page turner" ~ British Theatre Guide

"It combines the latest insights of today with the story of yesterday. It reads like a fast-moving ride on a theatre-go-round - only much more informative. The gossip is fun, too" ~ Sir Christopher Frayling

'I am bowled over by The Time Traveller's Guide to British Theatre ... I've read many histories of theatre in my time ... but never before have I chortled and marvelled my way through anything quite so informative and entertaining - and for the authors to have done both with such aplomb is quite an achievement... ' ~ Susan Elkin, The Stage