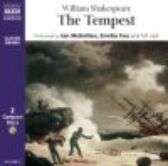 Sir Ian McKellen, fresh from his performance as Gandalf in Lord of the Rings is Prospero, and heads a strong cast in Shakespeare's last great play in which the wronged duke raises a Tempest to shipwreck his old opponents on his island so that he can ensure justice is done

With Emilia Fox as Miranda, Scott Handy in the pivotal role of the sprite Ariel and Ben Owukwe as Caliban, this new production directed by John Tydeman, balances the magic and the earthiness with music playing a key role

On stage, an actor can be doing one thing and saying something else whereas here, in the recording studio, you must be much clearer about what you are doing, so it is unambiguous

So John Tydeman has been stressing certain qualities such as anger and passion, love or regard and gentleness. I think that makes the performance less complicated for me which is the right thing to do

It isn't really a complicated play. The story is swift and unremarkable really except the forgiveness that takes place. It all happens very quickly

It is satisfying at the end for the audience that everything is so neatly and certainly resolved. There is less ambiguity at the end of this play than there is at the end of most Shakespeare. Well there are some happy marriages, such as Beatrice and Benedick for example, which are probably doomed to failure, whereas Miranda and Ferdinand seem well matched and Prospero got it right as he gets most things right really"

Runs about two and a half hours