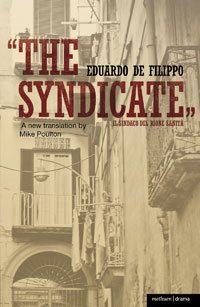 Smuggled out of Naples in his youth after stabbing a brutal night-watchman to death, Antonio Barracano returned home in the 1960s as a wealthy man

He used his newfound status to quash his murder conviction, and was soon feared but respected throughout the city

He rules the city's underbelly with a rod of iron ...

A dark comedy of pathos and farce by one of Italy's pre-eminent dramatists of the twentieth century, Eduardo De Filippo's The Syndicate (Il sindaco del rione Sanità) is made newly accessible and contemporary by this translation by Mike Poulton