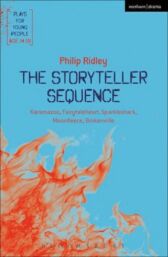 As an old woman and five teenagers begin to act out stories for a mute and frightened child, they begin to discover a little of who they were and what they can be

Karamazoo is a fifteen-minute monologue about one of the coolest, most popular kids in the school, whose recent increase in popularity is the direct result of a character make-over following the death of a parent

A witty and moving performance piece for the teenage actor

Fairytaleheart features two fifteen-year-olds, Kirsty and Gideon, who meet for the first time and come to terms with their broken families by sharing their hopes, fears and past experiences - as well as stories - in a derelict community centre

Moonfleece sees Curtis, a young right-wing activist, arrange a meeting in a flat of a derelict tower block where he lived as a child

But his older brother's ghost keeps haunting him

An intense and thrilling exploration of memory and identity.

Brokenville features an unknown disaster, which has left seven characters with little knowledge of who they are or of what has happened