The Sound of Musicals 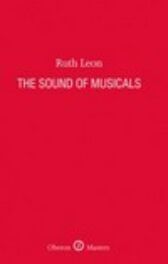 The world of musicals is beautiful, complex, hilarious, hard-headed, and improbable

It's as hard to make a great musical as it is to fly a spaceship to the moon - and there are at least as many moving parts!

Ruth Leon tells all about the composers, the lyricists, the directors and the pioneers of the stage musical on both sides of the Atlantic while trying to reveal the truth behind the eternal question - what are musicals and why do we love them?

"A slim and succinct account of the handful of 20th century musicals which, in Leon's very well informed and experienced opinion, have changed the genre forever ... I learned a great deal. Buy it" ~ The Stage

"Light-hearted but informative with an air of authority ... " ~ Whatsonstage

"Ruth Leon has the ability to capture the essence of each musical, which is the real strength of pocket-sized hardback ... a lovely little volume that will delight any devotee of this genre" ~ British Theatre Guide"

"A must for any performing arts or drama student" ~ Ink Pellet