The Sluts of Sutton Drive 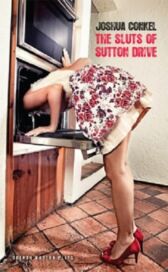 'Would you ever want to sit with me in the dark? Just sit with the lights out, barely even touching, maybe not touching at all, and just listen to me breathe?'

Everybody wants a piece of Stephanie Schwartz

Her son's demanding nuggets, her boyfriend wants her to wax and her best friend's taking her to a striptease class

And now there's a rapist on Sutton Drive

And an obscene caller invading her home

And a Portal to Hell beneath her sofa

How far must she go to make it all stop?

And how far is too far?

"Featuring a rapist, two grotesque murders, a dance to Kate Bush, hell unleashing itself and some fantastically laugh-out-loud and jaw dropping dialogue, The Sluts of Sutton Drive is a hoot and a half. Conkel's deliciously dark and comic play ... crude, hilarious and shocking ... pure entertainment bliss" ~ Jake Orr, A Younger Theatre

"A darkly comic exploration of a broken woman, and the extreme places our mind can take us when left unchecked. But foremost, it's crass, gory and surprising" ~ Tim Macavoy, So So Gay

"Definitely not for the faint-hearted ... This weird play will make you laugh and gasp at the same time" ~ Carolin Kopplin, UK Theatre Network

"Imagine if Desperate Housewives had been directed by Quentin Tarantino. Or if Thelma and Louise had been written by Martin McDonagh. Throw in a healthy pinch of David Lynch, and a nod towards Muriel's Wedding and you might come close to getting a taste of the deliciously disturbing world conjured up by American playwright Joshua Conkel" ~ Sebastian King, Curtain Up