The Slaves of Solitude 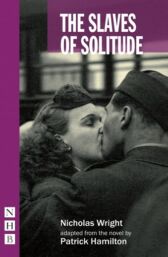 Large Mixed Cast
"I don't know how I became so filled with hate. I find it shocking that I did. Somebody said to me that war affects us in all kinds of ways, and that drinking is only one of them. Perhaps hating people is another. Perhaps sex is too"

Miss Roach is forced by the war to flee London for the Rosamund Tea Rooms boarding house, a place as grey and lonely as its residents

From the safety of these new quarters, her war effort now consists of a thousand petty humiliations, of which the most burdensome is sharing her daily life with the unbearable Mr Thwaites

That is, until a new boarder moves into the room next to Miss Roach's

Outwardly friendly, she soon starts upsetting the precarious balance in the house

The play premiered at Hampstead Theatre, London, in October 2017