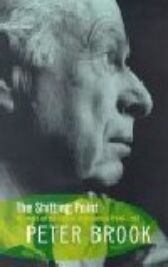 "Theatre only exists at the precise moment when these two worlds - that of the actors and that of the audience - meet - a society in miniature, a microcosm brought together every evening within a space. Theatre's role is to give this microcosm a burning and fleeting taste of another world, in which our present world is integrated and transformed" ~ Peter Brook

In The Shifting Point, his first book since The Empty Space, Brook assesses the lessons of his pioneering work from his brilliant debut at Stratford and the West End in the 1960s to the triumphant success of The Mahabharata

"The great thing about Brook is that, in a medium where others provide answers, he keeps asking questions. This sage and stimulating book shows that, inside a sophisticated adult mind, lurks the intemperate curiosity of a child; which is the mark of genius" ~ Michael Billington