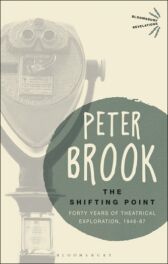 "Theatre only exists at the precise moment when these two worlds - that of the actors and that of the audience - meet - a society in miniature, a microcosm brought together every evening within a space. Theatre's role is to give this microcosm a burning and fleeting taste of another world, in which our present world is integrated and transformed" ~ Peter Brook

"The great thing about Brook is that, in a medium where others provide answers, he keeps asking questions. This sage and stimulating book shows that, inside a sophisticated adult mind, lurks the intemperate curiosity of a child; which is the mark of genius" ~ Michael Billington