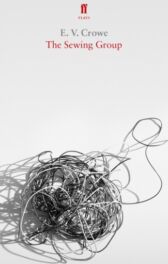 "I have spoken very clearly with her and I have told her that she is new here and that she must live how we live ... There's no point in just making quilts. They have to serve the village. They have to DO something"

A woman arrives in a rural village in pre-industrial England

★ ★ ★ ★ "Cross-stitch, espionage and possibly time-travel converge in E.V. Crowe's new play... Crowe builds it up, stitch by stitch ... Intriguing and unsettling ... keeps you guessing until near the end" ~ Financial Times

Initially there are two of them known simply as A and B. They are joined by a newcomer, C, who starts as an innocent novice but who gradually asserts her authority. She introduces striking colours and radical designs into the sewing circle and when a grieving widow, D, joins them, she assumes complete control. She gets the women to make character-revealing quilts and stirs up mutual suspicions with accusations of theft

By mid-point, you assume that Crowe is dealing exclusively with power struggles in a hermetic female world. But it soon becomes clear that she has larger targets in view ..." ~ The Guardian