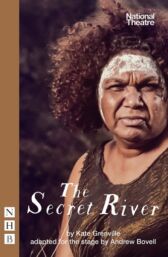 William Thornhill arrives in New South Wales, deported as a convict from the slums of London

But as he plants a crop and lays claim to the soil on the banks of the Hawkesbury River, he finds that this land is not his to take

Its ancient custodians are the Dharug people

The Secret River was premiered by the Sydney Theatre Company in 2013 and had its UK premiere in August 2019, as part of the Edinburgh International Festival, before transferring to the National Theatre, London

'A powerful confrontation with Australia's colonial past ... essential' ~ Financial Times

'A sweeping saga with deep currents ... an epic story from Australia's brutal past' ~ The Times

'Flows and thunders, and inescapably sweeps you away ... a hugely powerful adaptation' ~ The Stage

'A ravishing and sobering epic ... a huge and impressive piece of theatre, that tells us a story about our own past that we ought to listen to' ~ Time Out