The Romance of Magno Rubio 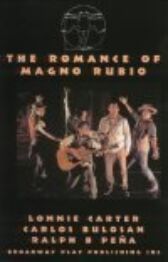 "The high-priest of multicultural hiphop, Lonnie Carter, brought his übertheatricality to a movingly simple story of Filipino migrant workers scratching their way toward love and self-worth" ~ Chris Jones, The Chicago Tribune

"There may be no bouquets of flowers or Michel Legrand love songs in The Romance of Magno Rubio, but this unusual eighty minute fable ... has much to say about the world's most delicate emotion. Playwright Lonnie Carter uses an intriguing mixture of verse, music and dialogue" ~ Brian Scott Lipton, The New York Post

" ... one of those theatrical gems that heals your heart even as it breaks it. A magnificent piece of deeply humanistic storytelling. This is the tall tale of a man who may be small in stature and worldly goods, but is gigantic in his ability to believe in himself and his dreams-or at least in his ability to keep self-delusion alive. It is classic in its outline. But it is distinctive in the way Carter's lyrical yet powerfully rhythmic language (English laced with bursts of Tagalog, a Filipino language) melds sounds and cultures." Hedy Weiss, Chicago Sun Times