The Ritual Slaughter of Gorge Mastromas 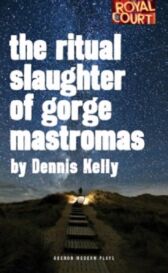 "If you could lie without flinching, corrupt without caring and succeed at all costs how far could you go how much could you make?"

From the early promise of the '70s through to the unrelenting capitalism of the '80s and '90s, follow Gorge on the journey from innocence to savage greed and knotted honesty, as he invents three golden rule for success

'... a twisted, darkly witty morality fable about the evils of rampant, greed-is-good capitalism' ~ The Independent

'There's a wry confidence in the writing ... [An] experimental and sprawling epic, but also a satire on the greed-is-good society' ~ The Arts Desk

" ... an epic morality play The play's form is beguiling . With its mixture of hilarity and leftfield insights, this is an extraordinary, strenuous and haunting evening" ~ The Stage