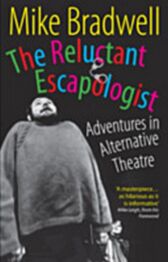 An unrivalled unofficial history of the rise - and partial fall - of fringe theatre, Mike Bradwell's deadpan account of his adventures is one of the funniest and angriest books to come out of theatre today

As he travels through a counterculture peopled by nutters, chancers, dreamers and prophets, Bradwell makes us marvel at his resilience and creativity, captured in a succession of vivid - and often laugh-out-loud - episodes such as ...

... creating a character with Mike Leigh

... enjoying the onstage mass orgasms of The Living Theatre

... becoming an underwater escapologist (reluctantly) in the Ken Campbell Roadshow

... and doing battle with the Health and Safety brigade, the funding bodies and a Polish heavy-metal disco during his ten years running the famous Bush Theatre in West London

He makes a compelling and urgent case for preserving the true and subversive spirit of theatre from castration at the hands of bankers, consultants, stakeholders, cultural-diversity compliance monitors and the Arts Council

"Towards the end of this brilliant account of his epic forty-year journey, Mike tells us, 'I don't believe that theatre is safe in the hands of grown-ups', and it is his healthy, eternal youthfulness that makes the book so inspiring" ~ Mike Leigh, from his Foreword

See also, Inventing the Truth - Devising and Directing for the Theatre