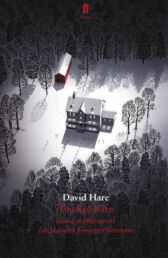 With his American wife, he settled at Shadow Rock Farm in Lakeville and years later, he wrote La Main, a psychological thriller set in a New England farmhouse which focuses on one man's struggles with jealousy and depression following the apparent death of a friend

David Hare has taken this novel, and forged it into a startling new play ...

On their way back from a party, two couples struggle home through the snow

Not everyone arrives safely

The action moves back and forth through a four-month period, showing events leading up to that night

As those who make it to a remote New England farmhouse to wait out the blizzard, Donald is sent back out to look for his missing friend Ray

Will Ray make it back alive?