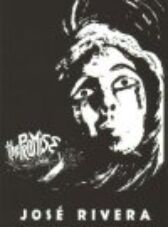 "... an evening of considerable heat and no little roughshod beauty. The work, poetic in concept and symbolism, is set in the back yard of a Puerto Rican enclave in Patchogue, L. I., but also in the recent mystic past of blood rivalries and macho Montague/Capulet feuds...." Jerry Tallmer, New York Post

" ... but what's most impressive about THE PROMISE is its brazen insistence that theater can dare to be great in the old-fashioned meaning of the word. This play makes no apologies for the theater, never tries to imitate film or television conventions. It restores the stage to its transformative, religious, spiritual origins. It believes in the theater as the one, true sanctuary for our communal dreams, our social nightmares, our superstitious secrets. It keeps theater's promise to raise forbidden issues and explore taboo topics. ...THE PROMISE makes a vow in the first scene--to offer an exotic, lush weave of the surreal and the real--which it never betrays." Richard Stayton, Los Angeles Herald Examiner

"Jose Rivera is out of the kitchen sink and into magical realism--that's the term the playwright uses to describe THE PROMISE, a modern-day tale of love, death--and love beyond it... THE PROMISE is about maturation, growth, about leaving superstition behind. It's also very concerned with the cultural genocide that's happening in Puerto Rico.... They learn English in school, and the indigenous folklore is not taught...." Janice Arkatov, Los Angeles Times