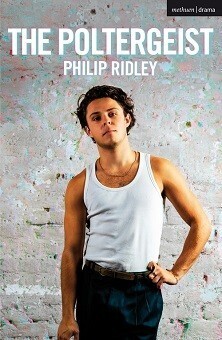 Sasha was destined to take the art world by storm

At the age of fifteen pop stars wanted his paintings, and a new exhibition was going to make him a rich man

But now he serves in a stationers, and no one's even heard of him … what went wrong?

Philip Ridley's darkly comic new play is about art, family, memory, and being haunted by the life we never lived

This edition was published to coincide with the world premiere performance at London's Southwark Playhouse, which was performed live and live-streamed around the world in November 2020

“An enthralling new play following our loose-cannon protagonist, Sasha, as he drowns in his deteriorating sanity over the course of a single day” ~ A Younger Theatre

“Compelling, absorbing, vital, frantic, unmissable. All words that spring to mind for Philip Ridley's The Poltergeist. This really is a play that demands to be back come the end of lockdown, it is stunning online, one can only imagine how it will feel to see this in the flesh” ~ Everything Theatre

“Ridley's text is superb: typically energetic, with vigorous storytelling and a dazzling mix of heart and head. He clearly shows how families fight over memories, with disputes over what actually happened being carried on for years, and other people (old neighbors and new acquaintances) being sucked into the dispute. His story has a great big splash of ambiguity, as well as being an all-too-recognizable comedy of suburban manners, where clichés make you grit your teeth and where humanity is always held at bay by social expectations” ~ Aleks Sierz, Theatre Times

“It will come as no surprise to admirers of Philip Ridley, that he has penned another jewel in the crown of theatre, but add in a tour-de-force performance from Joseph Potter and we quite possibly have one of the most remarkable pieces of theatre of the year. With or without a standing ovation, The Poltergeist is one of those rare and unmissable pieces that will be talked about for years to come” ~ Theatre Weekly