The Phoenix of Madrid 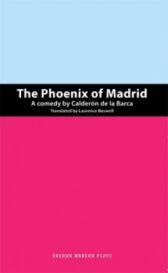 Don Pedro has it all high position, wealth, a beautiful family and enjoys the good life in the heart of the Spanish capital

But now he faces a challenge that would test the patience of a saint - it's time to marry off his daughters!

It's bad enough that his eldest Beatriz is both obsessed by the latest fashions and talks like a university professor, but his youngest Leonor is already enjoying illicit midnight trysts with her lover and is in no mood to accept an arranged marriage

Throw into this explosive mix the extravagant young man about town, Don Alonso, who thinks all women, like all plays, are excellent on the first night and boring on the second, and you have the recipe for an hilarious comedy that reaches out effortlessly across the centuries

Calderon was the greatest genius of the Spanish Golden Age (1580 - 1660), one of the richest periods in world theatre