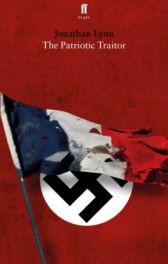 Two giants of the twentieth century ...

Phillipe Pétain, a tough, uncompromising soldier who rose through the ranks to save France in 1916 Battle of Verdun