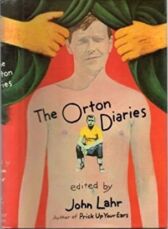 From December 1966 until his murder in August 1967, Joe Orton kept a series of diaries that prove to be one of the most candid and unfettered accounts of that remarkable era

They chronicle his sexual escapades in the most unlikely of places - at his mother's funeral, in a pissoir on the Holloway Road, with a dwarf in Brighton, and, extensively, in Tangiers

Stylistically, the diaries show Orton, with Loot an established hit and What the Butler Saw in the making, at the very top of his form, outrageous and outrageously funny

"He is the Oscar Wilde of Welfare State gentility" ~ Observer