The Ordeal of Gilbet Pinfold 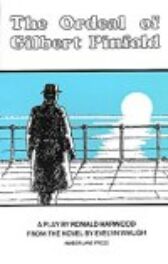 In 1954, Evelyn Waugh, reacting against a bitterly cold winter, and suffering from bouts of rheumatism and insomnia and forgetfulness, set off alone on a sea voyage to Ceylon

On his return to England, he confided to a friend, 'I haven't seen you for a long time, but then I've seen so few people because - did you know? - I went mad.' By February 1956 he felt strong enough to describe in detail what happened during the voyage

The result was a short novel, 'The Ordeal of Gilbert Pinfold'. In this dramatisation Ronald Harwood skilfully recreates the ordeal of a man living through a nightmare of intrigue and conspiracy, beset by hallucinations and voices in the air