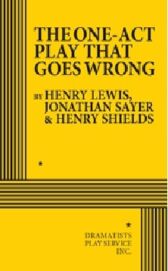 After benefiting from a large and sudden inheritance, the inept and accident-prone Cornley Polytechnic Drama Society embark on producing an ambitious 1920s murder mystery

Can they get the production back on track before the final curtain falls?

A true global phenomenon, it is guaranteed to leave you aching with laughter

“A masterpiece of malfunction” ~ Times of London