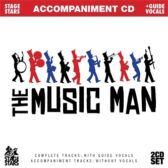 Vocal & Backing Tracks to 18 Songs from the Broadway Musical

Based on a story by Willson and Franklin Lacey, the entire show - book, music, and lyrics was created by Meredith Willson

The plot concerns con man Harold Hill, who poses as a boys' band organizer and leader

He proceeds to sell band instruments and uniforms to the naive folk of a small Iowa town, and promises to train the members of the new band

But when Harold helps her younger brother overcome his lisp and social awkwardness, Marian begins to fall in love ...

THIS 2-CD ALBUM FEATURES 18 SONGS FROM THE BROADWAY MUSICAL

Each of the songs appears on the album twice

Once with Backing Tracks & Guide Vocals

And once with Backing Tracks only

NB - Two songs from this show - "Sincere" and "It's You" are performed a capella - the Guide vocals are available on this album, but not the Accompaniment tracks

Piano Lesson and If You Don't Mind My Saying So

Lida Rose / Will I Ever Tell You?

Till There Was You

Goodnight, My Someone and Seventy-Six Trombones (Reprise)