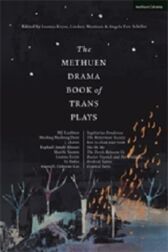 From groundbreaking new work from across America's stages to unpublished work by new voices, these plays address themes such as gender identity and expression to racial and religious attitudes toward love and sex

Edited by Lindsey Mantoan, Angela Farr Schiller and Leanna Keyes, the plays selected explicitly call for trans characters as central protagonists in order to promote opportunities for trans performers, making this an original and necessary publication for both practical use and academic study

Sagittarius Ponderosa by MJ Kaufman
Archer's not out to his family but when his father falls ill he has to move back to his childhood home in central Oregon. At night under the oldest Ponderosa Pine, he meets a stranger who knows the history of the forests and the sadness of losing endangered things. As Archer accepts big changes in his family, he discovers the power of names and the histories they make and mask. Sagittarius Ponderosa is a play about changing names, love potions, and tilling up the soil to make room for new growth

The Betterment Society by Mashuq Mushtaq Deen
Three women on a godforsaken mountain wrestle with the elements, with each other, and with a world that does not value their way of life. As their resources dwindle, Gertie, Lynette, and Doreen try to redefine what it means to be civilized - a mission that forces them to confront what they value and what they're willing to sacrifice

how to clean your room by j. chavez
Spencer begins to clean their room and reflect on their relationships with the people around them. Who can and can't we control in our lives, does caring mean anything beyond words, and does infatuation go both ways? A play in two cycles with anxiety, depression, and puppets

She He Me by Raphaël Amahl Khouri
She He Me follows the lives of three Arab characters who challenge gender. Randa is an Algerian male-to-female who is expelled under the threat of death from her homeland because of her LGBT activism there. Omar is a Jordanian gay man who rather than body dysphoria, suffers social dysphoria when it comes to the strict codes of masculinity imposed and expected of him by both the heterosexual and gay people around him. Rok is Lebanese and female-to-male. Through humor and horror, the three characters come up against the state, society, the family, but also themselves

The Devils Between Us by Sharifa Yasmin
In a small town in the boonies of South Carolina, a closeted young man named George is trying to figure out how to keep his late father's business running, only to be faced with a ghost from his youth. A young Muslim, whom he knew as his boyhood lover Latif, has returned as Latifa to take care of her estranged father's funeral. Forced to confront devils both have been avoiding, they find that their only way out of the past is through each other

Doctor Voynich and Her Children by Leanna Keyes
This “prediction” is set in America years after reproductive healthcare has been made illegal. Doctor Voynich and her apprentice Fade travel the countryside in a converted ambulance dispensing harmless herbs by day and providing family planning services by night. Fade tries to help local youth Hannah complete her abortion, using forbidden knowledge from an ancient manuscript, before her mother and the sheriff can nail them for the “attempted murder of an unborn person.” This play about mothers and daughters is poetic, sexy, vulgar, queer, and a little too real

Firebird Tattoo by Ty Defoe
Sky Red Rope goes on a quest to find her father, ultimately finding out she is queer by getting a tattoo. This play features themes of queer two-spirit identity on the Indigneous reservation in Anishinaabe territory

Crooked Parts by Azure Osborne-Lee
Crooked Parts is a family dramedy set in yesterday and today. Freddy, a Black queer trans man, returns to his family home in the South after his fiancé breaks up with him. Once there, Freddy must navigate the tension created by his transition and his brother's serial incarceration. Meanwhile, in his past, 13-year-old Winifred struggles to balance her relationship with her mother with her desire to better fit in with her peers. Crooked Parts is poignant, queer, funny, and definitely, definitely Black