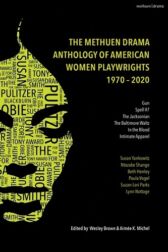 They also provide a helpful Introduction to the last 100 years of theatrical activity ...

From suffrage and anti-lynching plays, through the explosive 1960s, to recent Broadway triumphs, highlighting women's struggle to put their vision and voices on the American stage

In the Blood ~ Suzan-Lori Parks

Each play is accompanied by a short introduction providing the biographical background of the playwright as well as discussing the dramatic style of her writing, the extent to which her work is informed by major playwrights of the period, and how the specific work illustrates the overarching themes of her body of work

"This much-needed collection fills a major gap in our sense of the writers for the American theatre. Here assembled are not just the "greatest hits" among the plays written by women, but a coherent and thorough examination of the many careers and voices that have shaped the stage for the last century" ~ Melia Bensussen, Artistic Director at Hartford Stage, USA