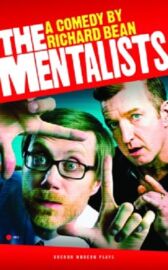 From the author of the acclaimed One Man, Two Guvnors ...

Do these things worry you?

Middle-aged manager Ted hits on a Utopian plan to change the way we live in this darkly funny play ...

'Bean is making merry here with his experience as both a stand-up comedian and a sit-down psychologist. What's particularly impressive is his ability to suspend a joke or tall tale's pay-off, or end it in an unexpected way." ~ What's On Stage ★★★★

" successful conversational, ruminative piece that dramatises the mutual dependency of old friends ... this oddest of "Odd Couple" comedies" ~ The Independent ★★★★

"It seems obvious that any show that brings such a great comic team together will be hilarious and the show most certainly lives up to expectations. The plot focuses on their friendship and the execution of Ted's plan. There are countless fantastic jokes... Neither character follows through expectations from their introduction until the show's end... This is a dark comedy with a unique take on the importance of friendship and getting through life. The entire run is echoed by audience's laughter throughout and makes for a really fantastic night out at the theatre" ~ A Younger Theatre

"The Mentalists confirms Richard Bean as a writer of beguiling originality, with a gift for both laugh-out-loud dialogue and a sympathetic understanding of the darker recesses of the human heart" ~ Telegraph