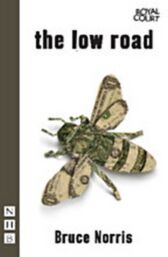 From the author of the multi-award winning Clybourne Park, this darkly comic fable of free-market economics and cut-throat capitalism grapples with the workings of our financial markets through the medium of an epic tale set largely within 18th-century America...

Our narrator-host is Adam Smith, the Scottish advocate of laissez-faire economics, who steers us through the extraordinary story of two men whose lives become inextricably linked:

Picaresque young entrepreneur Jim, who sets out on a quest for wealth from his rough beginnings in a brothel, ruthlessly employing his aptitude for mathematics and ability to cheat people

And John Blanke, an African slave who becomes an educated man with a hunger for freedom and instinct for charity

Together, this odd couple career through an America fighting for independence

"The most ambitious play I have ever worked on" ~ Dominic Cooke, Artistic director of the Royal Court

It's a great story that encompasses all of those issues but in a fantastic narrative and in characters that have emotional resonance, rather than just a presentation of the facts" ~ Johnny Flynn