The Liar & The Illusion & Le Cid 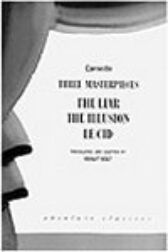 Pierre Corneille (1606-84), the great neo-classical dramatist, wrote over thirty plays during his long and varied career

Triumphant in both comedy and tragedy, his plays remain at the core of the repertory

The Liar is a hilarious comedy

Le Cid, Corneille's most famous play, signalled a resurgence in French drama during the seventeenth century

Both The Liar and The Illusion enjoyed critical and box office success at the Old Vic, reaffirming Bolt as one of the world's foremost translators of drama