The Letters of Noel Coward 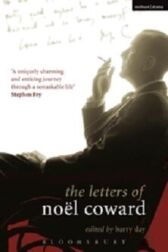 Coward's multi-faceted talent as an actor, writer, composer, producer and even as a war-time spy(!), brought him into close contact with the great, the good and the merely ambitious in film, literature and politics

With letters to and from the likes of George Bernard Shaw, Virginia Woolf, Winston Churchill, Greta Garbo (she wrote asking him to marry her), Marlene Dietrich, Ian Fleming, Graham Greene, Evelyn Waugh, Fred Astaire, Charlie Chaplin, F D Roosevelt, the Queen Mother and many more, the picture that emerges is a series of vivid
sketches of Noel Coward's private relationships, and a re-examination of the man himself

A sublime portrait of a unique artist who made an indelible mark on the 20th century, from the Blitz to the Ritz and beyond

A uniquely charming and enticing journey through a remarkable life. Coward's own record is made all the more delightful by the wise and helpful interpolations of Barry Day, the soundest authority on the Master that there is ~ Stephen Fry