The Krays - A Screenplay 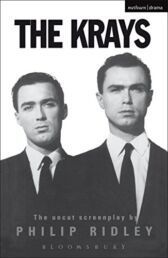 Winner of the 1990 Evening Standard Film Award for Best Film

Philip Ridley's original, uncut screenplay, almost as notorious as its subject matter is a stylised meditation on maternal love, childhood, violence and homo-eroticism

One of the masterpieces of contemporary cinema

"Ridley ... reveals himself most welcomely as a genuinely innovative film maker, untrammelled by conventions and with an individualistic imagination firing on all cylinders" ~ The Evening Standard