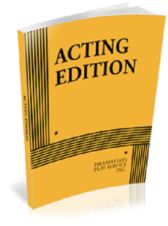 Self-assured and unyielding Bart Kramer, after accepting an important business position, inexorably intrudes himself into the lives of his associates

Coldly and dispassionately he sets out to "save" it, particularly the young man who has been named as his assistant, and the awesome power of his driving ego is so great that resistance to his will is futile

A potent, baleful force wreaking havoc not only on the younger man but on all who come in contact with it, "The Kramer" becomes almost Christ - like in his power, yet Satan-like in the terrible toll his actions take

And the otherworldly quality of the man, and the play, is emphasized by the fluidity and fragmentation of the staging - as though the action were occurring in a strange, sometimes ethereal dream, grounded in reality but filled with disturbing overtones of dark and scarcely understood forces

In the end Kramer is as inscrutable and elusive as ever, but the cruel reality of the damage he has done to others remains to be pondered - as does the haunting, provocative question of "why?"

Brilliantly original in its staging concepts, this biting, mordant study of a man deluded by his own god-like powers enjoyed great success in its production on the Mark Taper Forum's "New Theatre for Now" series in Los Angeles.