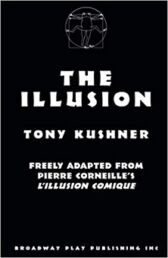 A lawyer, facing mortality, and desperate to find the son he drove away years before, travels in the dead of night to a mysterious cave

In the cave he engages the services of a wizard, who conjures up visions of the romantic, adventurous, perilous life the lawyer's son has been living since his father expelled him from home

A wildly entertaining tale of passion and regret, of love, disillusionment and magic

“In an eminently playable, witty adaptation by Tony Kushner, THE ILLUSION comes across as downright entertaining, not an adjective anyone who reads Corneille in college is likely to expect. Unlike his better known plays, which have heroic subjects, THE ILLUSION is concerned with domestic matters, the alienation of parents from children, marital infidelity. While it is serious about these subjects, it puts them in an unusual context: A father has consulted a magician about his estranged son, and the magician shows him scenes from his son’s life … The comedy is elegant, full of depth …” ~ Howard Kissel, Daily News

“What are the real powers of sorcery? To alter? To define? To transport? Tony Kushner and Pierre Corneille before him go for all three, which is only part of the magic in Kushner’s fanciful adaptation of Corneille’s L’ILLUSION COMIQUE. Freely adapted it is, in the best sense. For Corneille, whose later, loftier verse plays earned him the stodgy title of Father of French Tragedy, THE ILLUSION was a mildly satirical precursor to all that, a glitch, written when he was only twenty-nine. Yet even then, it was burdened by a ponderous 17-century neo-classical style that kept the word comique out of 20-century range. Kushner’s achievement is digging under all the circumlocution to salvage an ageless and universal tale, stripping the nugget of its ornamentation and serving it up to us lingually lucid and lean. There is some colloquial indulgence in the rewritten language, but it’s mostly judicious. We’re in on the joke, which never goes too far. Simply put, this the tale of a rigid father, Pridament, who, stricken with remorse for having provoked his son to flee the family home, searches out the magician Aleandre in the hope that he will help him find out what happened to the wayward boy. Aleandre does, and the ironic twist of the piece is that after several false starts, passionate re-enactments, comic delusions and confusions, the truth is revealed and Papa finds he doesn’t like it. The light-hearted ending is a cynical but honest lesson in selective affection. All the fun, however, is in getting there. THE ILLUSION takes us into territory on which theater thrives: fantasy, witchcraft, transcended place and time …” ~ Sylvie Drake, Los Angeles Times

“What a fascinating, totally theatrical excursion we’re in for in this 17th-century fairytale-fable first spun by French classical dramatist Pierre Corneille. In 1639, L’ILLUSION COMIQUE was a comedy they didn’t know what to make of; 20th-century playwright Tony Kushner knows what to make of it. Triumphantly exhumed and enlivened three and a half centuries later in Kushner’s fresh, free adaptation; it proves indeed to be … ‘a prematurely modern play.’ Both modern and ancient, timeless and timely, flippant and profound … It is a thorough delight … L’ILLUSION COMIQUE was a masterpiece waiting for its time to happen. Tony Kushner made it happen and made it better. It is essence of theater, essence of archetypal magic. Carl Jung would have loved it” ~ Polly Warfield, Drama-Logue