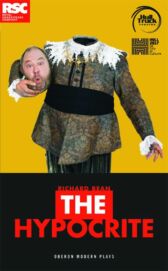 Sir John Hotham, Governor of Hull, is charged by Parliament to secure the arsenal at Hull and deny entry to King Charles I

If only it were that simple

With a Royalist siege outside the city walls and the rebellion of the mob within, Civil War seems inevitable

And losing his head more than probable

"The Hypocrite serves as a scabrous, bawdy, witty, often flagrantly silly love-letter to Hull and its purported place in a crucial moment of national history ... it hits the bull's-eye...Richard Bean returns to One Man, Two Guvnors form with a brilliantly entertaining new farce" ~ Telegraph ★★★★

'For those who saw Bean's hit comedy One Man, Two Guvnors there's a similarly impish sense of fun here. It's full of daft wordplay with plenty of misunderstanding of the Hull accent and gags that play on local knowledge... It's a delight' ~ Hull Daily Mail ★★★★