The History of Opera - 4CDs 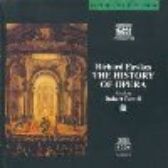 Opera began at the end of the 16C when a group of Italians tried to recreate how they felt the Ancient Greeks might have set words to music and it has since fascinated, infuriated, delighted, been censored, banned, excited riots and even won a nation its freedom

This wonderful story is told using more than 115 musical examples, including some of the greatest singers of the 20C - Caruso, Chaliapin and many more international stars