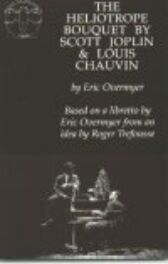 "Eric Overmyer is not a playwright who does things simply, so it's probably not enough to say that his latest theatrical conceit, THE HELIOTROPE BOUQUET BY SCOTT JOPLIN AND LOUIS CHAUVIN is a dream play. It's really three dreamswrapping themselves around one another like languid tendrils of opium smoke stirred by a ceiling fan. The first dreamer is Scott Joplin, widely heralded as the king of the ragtime composers, although when we initially meet him, slumped over a piano by the dim light of a Harlem morning, fame and inspiration are behind him, and his tortured mind is obsessed with sultry images of the `poxy girls' in the House of Blue Light, a New Orleans sporting house he frequented as a youth. The second, more impertinent, dreamer is Louis Chauvin--Joplin's match, if not his better, in the art of syncopation--who had the misfortune (or the contrariness) to leave nothing behind him when he died of multiple sclerosis at 26. The only concrete evidence of his genius is Heliotrope Bouquet, the slow drag two-step he wrote with Joplin, who saw to it that the sheet music got published. The third dreamer is Mr. Overmyer himself, who has seized upon this fleeting collaboration and its few tangible details as the pretext for some graceful musings about the ephemeral nature of art and reputation...." David Richards, The New York Times

"Resounding with the bittersweet mood and slow grace of the ragtime music it celebrates, Eric Overmyer's THE HELIOTROPE BOUQUET BY SCOTT JOPLIN AND LOUIS CHAUVIN is an elegiac fever dream of a play, a skillful weaving of fact and fancy played against a backdrop of memory, loss and the redemptive power of art.... Overmyer's insertion of fantastical elements into conventional narrative has been used to comic, or at least whimsical, effect before, notably in his ON THE VERGE, OR THE GEOGRAPHY OF YEARNING. But in HELIOTROPE, the playwright spins this technique into a poignant composition peppered with moments of joyful release.... Overmyer's rich, clever dialogue gives the play a sumptuous feel.... Running under an hour and a half, HELIOTROPE is less like the ambitious ragtime opera that consumed Joplin's final years than the brief but startling collaboration that gives the play its name. Ending on a tentative note of hope and revival, Overmyer adheres to Joplin's musical tenet of `sweet resolution' even as the cynical Chauvin's admonition lingers: `Sweet resolution,' he tells Joplin, `is the difference between music and life.'" Greg Evans, Variety

Originally produced by Center Stage in Baltimore, and subsequently in New York at Playwrights Horizons