The Guns at Christmas 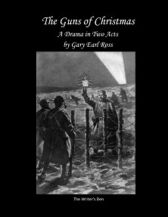 Two squads of soldiers - one British, one German - face each other across the ruined terrain of No Man's Land, which holds both the bodies of their fallen comrades and the promise of certain death for anyone who tries to reach the enemy trench

But it's Christmas Eve and the bombardments trail off early

Then, in the darkness, someone begins to sing "Silent Night"