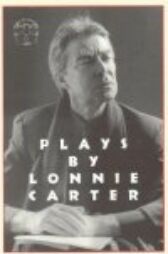 LEMUEL - Part one of THE GULLIVER TRILOGY

"In his language-drunk play LEMUEL, Lonnie Carter has drawn on everything from the spiraling patter of modernist writers Gertrude Stein and James Joyce, to the embroidered exhortations of Jesse Jackson, to the infectious rhythms of rap, hip-hop and funk.... LEMUEL is dazzling chamber theater." Hedy Weiss, Chicago Sun-Times
"If one man's story can speak for his time, then Lonnie Carter's LEMUEL sings it in jumping jive talk, ragged rhythms, choral chanting, hip-hop tongue twisters and the rolling thunder of a civil rights sermon." Lawrence Bommer, Chicago Reader - minimum 5m 4f, multi-culturally diverse casting essential

"The verbal and narrative gyrations of a Lonnie Carter play are no more daunting than whipping through a maelstrom on water skis.... GULLIVER, Mr Carter's latest explosion, takes the hero of Jonathan Swift's satire on a tour that makes American politics seem even more lunatic than it is." D J R Bruckner, The New York Times
"GULLIVER at the Berkshire Public Theater shows Carter at his most brilliant...a SKIN OF OUR TEETH for the '90s." Malcolm Johnson, The Hartford Courant
2m 1f, plus ensemble minimum of 2m 3f, multi-culturally diverse casting essential

"Lonnie Carter's GULLIVER TRILOGY screams and laughs like the irreverent love-child of Jonathan Swift, Joan of Arc and George Clinton. The wild maze of Carter's satiric language propels you on a wondrous journey into the confusion of dark hatreds and heavenly aspirations swirling in America's heart. As one who gleefully follows Mr Carter's travels my only advice is, enjoy the trip!" Neel Keller, Artistic Associate, La Jolla Playhouse
2m 1f, plus ensemble minimum of 2m 3f, multi-culturally diverse casting essential