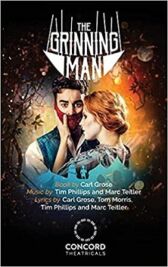 A strange new act has arrived at Trafalgar Fair’s freakshow

Who is Grinpayne and how did he get his hideous smile?

With the help of an old puppeteer, his pet wolf and a blind girl, Grinpayne’s tale is told

When word spreads across the capital, everything changes

Desperate to know the terrible secrets of his mysterious past, Grinpayne leaves his true love behind and embarks on a journey into an even crueller world - the aristocracy

The Grinning Man is a fairy-tale love story streaked with pitch-black humour, lashings of Gothic horror and swashbuckling adventure