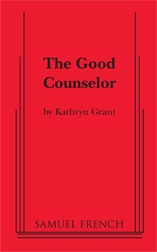 Vincent, a bright young lawyer in the Public Defender department has been assigned to defend a young woman accused of killing her three-week-old son

Hounded by his community and haunted by his past, Vincent struggles to defend both neglectful mothers - his client, and his own

A thought-provoking and beautifully written play, The Good Counselor literally prompts the audience to serve as the jury in determining what it means to be a good parent

"Unsettling drama ... Ms. Grant doesn't fall into the trap of oversimplifying her characters or seeing only one side of a relationshipthis is a sign of Ms. Grant's ingenuity as a playwright" ~ The New York Times

"Playwright Kathryn Grant is a promising talent with a sharp ear for dialogue ... engrossing, thoughtful and thought-provoking, and worthy of our attention" ~ Talkin' Broadway

"A searing new play ... provides a vivid picture of life's unrelenting hardness, as these people seek small pleasures in their lives, despite their struggles" ~ NJ.com