The Golden Years & The Man Who Had All the Luck 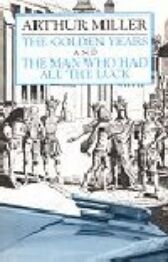 Unable to convert the Aztecs, Cortez assumes the role of barbarian, ravager of a civilization while Montezuma "convinced himself that the strange white creatures who came out of the ocean were fated to be his masters and at the same time apotheosize him to godhood now that he had, as he believed, led his Aztecs to the conquest of all the known world" (Miller)

The Man Who Had All The Luck was first staged in 1944. In this fable about human freedom and individual responsibility the hero, David Beeves, acts out an ironic reversal of Job's plight

Plagued by the contrast between his own success and the failures of those around him, he tries to make sense of his good fortune

In doing so, David poignantly confronts the question of the justice of fate

"The greatest American dramatist of our age" - Evening Standard