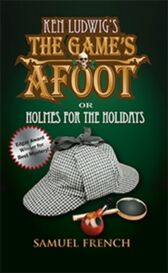 But when one of the guests is stabbed to death, the festivities in this isolated house of tricks and mirrors quickly turn dangerous

Then it's up to Gillette himself, as he assumes the persona of his beloved Holmes, to track down the killer before the next victim appears

"An inspired whodunit ... a snappy, clever drawing-room mystery. There are twists that cause the audience to gasp" ~ The Cleveland Plain Dealer

"From the intriguing opening mini play within a play to the surprise last scene a split second before final curtain, The Game's Afoot gives you everything you love about great live theatre. Billed as a comedy thriller you will find yourself swept along for a wild and funny ride" ~ Cleveland Examiner