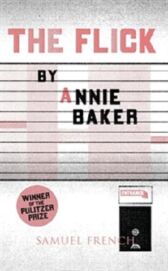 In a run-down movie theater in central Massachusetts, three underpaid employees mop the floors and attend to one of the last 35 mm film projectors in the state

Their tiny battles and not-so-tiny heartbreaks play out in the empty aisles, becoming more gripping than the lackluster, second-run movies on screen

With keen insight and a finely-tuned comic eye, The Flick is an hilarious and heart-rending cry for authenticity in a fast-changing world

"Hilarious and touching ... this lovingly observed play will sink deep into your consciousness" ~ The New York Times

"A hypnotic, heartbreaking, micro-epic about movies and moving on. Irreducibly theatrical" ~ Time Out New York

Exhilarating ... utterly in tune at every moment" ~ Village Voice