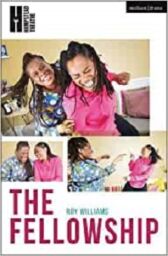 “Where’s the glory Mum? Where’s that perfect world for us, your kids?”

Children of the Windrush generation, sisters Dawn and Marcia Adams grew up in 1980s London and were activists on the front line against the multiple injustices of that time

Decades on, they find they have little in common beyond family ...

Dawn struggles to care for their dying mother, whilst her one surviving son is drifting away from her

Meanwhile, high­flying lawyer Marcia’s affair with a married politician might be about to explode and destroy her career

Can the Adams sisters navigate the turmoil that lies ahead, leave the past behind, and seize the future with the bond between them still intact?

This edition was published to coincide with the world premiere of Roy Williams’ The Fellowship, directed by Paulette Randall at London's Hampstead Theatre, and is, by turns, an electrifying, hilarious, gripping tale set in modern Britain