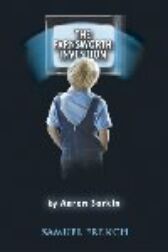 Separated by two thousand miles, each knows that if he stops working, even for a moment, the other will gain the edge

So who will unlock the key to the greatest innovation of the 20th century - the ruthless media mogul or the self-taught Idaho farm boy?

The answer comes to compelling life in The Farnsworth Invention

Aaron Sorkin is creator of The West Wing

"... a firecracker of a play in a fittingly snap, crackle and pop production under the direction of Des McAnuff, the drama has among its many virtues the ability to make you think at the same time that it breaks your heart" ~ Chicago Sun-Times

"The most exciting new play on Broadway ... a rousing theatrical experience" ~ MTV News