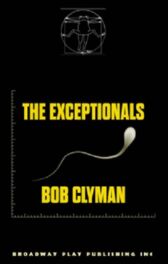 Where do you draw the line between eugenics and the desire of every parent to give his or her child the best possible start?

It's now five years later, and the parents of these exceptional children are discovering that the answer is anything but simple

"Playwright Bob Clyman doesn't waste time. Within the first five minutes of The Exceptionals, he digs in to moral and ethical questions framed in a remarkably straightforward context. What makes this play "exceptional'' is Clyman's ability to create a fairly humorous setup, and then ratchet up the tension to transform a simple story into a high-stakes drama" ~ Terry Byrne, The Boston Globe

"Clyman's brilliance is that he doesn't use a soapbox to pound his point home. He puts great trust in his script's subtlety, and he banks on the audience's intelligence to get the message Clyman employs much humor and creates a handful of very human character a highly successful, intelligent and chilling play" ~ The Nashua Telegraph

"The subject matter, sharp dialogue and subtleties of plot should appeal to other directors and producers looking for thought-provoking theater that entertains" ~ Broadway World